Karachi is the capital of the Pakistani province of Sindh. It is the most populous city in Pakistan, and fifth-most-populous city proper in the world. Ranked as a beta-global city, the city is Pakistan's premier industrial and financial centre. It is the cultural, economic, philanthropic, educational, and political hub of the country, and Pakistan's most cosmopolitan city. Situated on the Arabian Sea, Karachi serves as a transport hub, and is home to Pakistan's two largest seaports, the Port of Karachi and Port Bin Qasim, as well as Pakistan's busiest airport, Jinnah International Airport.

Though the Karachi region has been inhabited for millennia, the city was founded as the fortified village of Kolachi in 1729. The settlement drastically increased in importance with the arrival of British East India Company in the mid 19th century, who not only embarked on major works to transform the city into a major seaport, but also connected it with their extensive railway network. By the time of the Partition of British India, the city was the largest in Sindh with an estimated population of 400,000. Following the independence of Pakistan, the city's population increased dramatically with the arrival of hundreds of thousands of Muslim refugees from India. The city experienced rapid economic growth following independence, attracting migrants from throughout Pakistan and South Asia. Karachi is one of Pakistan's most secular and socially liberal cities. It is also the most linguistically, ethnically, and religiously diverse city in Pakistan. Karachi's population was enumerated at 14.9 million in the 2017 census. Karachi is one of the world's fastest growing cities, and has communities representing almost every ethnic group in Pakistan. Karachi is home to over 2 million Bangladeshi immigrants, 1 million Afghan refugees, and up to 400,000 Rohingyas from Myanmar.

Known as the "City of Lights" in the 1960s and 1970s for its vibrant nightlife, Karachi was beset by sharp ethnic, sectarian, and political conflict in the 1980s with the arrival of weaponry during the Soviet–Afghan War. The city had become well known for its high rates of violent crime, but recorded crimes sharply decreased following a controversial crackdown operation against criminals, the MQM political party, and Islamist militants initiated in 2013 by the Pakistan Rangers. As a result of the operation, Karachi went from being ranked the world's 6th most dangerous city for crime in 2014, to 71 by mid 2019.

When it comes to sports Karachi has a distinction, because some sources cite that it was in 1877 at Karachi in (British) India, where the first attempt was made to form a set of rules of badminton and likely place is said to Frere Hall.

Cricket's history in Pakistan predates the creation of the country in 1947. The first ever international cricket match in Karachi was held on 22 November 1935 between Sindh and Australian cricket teams. The match was seen by 5,000 Karachiites. Karachi is also the place that innovated tape ball, a safer and more affordable alternative to cricket.

The national team has been less successful in such limited-overs matches at the ground, including a five-year stint between 1996 and 2001, when they failed to win any matches. The city has been host to a number of domestic cricket teams including Karachi, Karachi Blues, Karachi Greens, and Karachi Whites. The National Stadium hosted two group matches (Pakistan v. South Africa on 29 February and Pakistan v. England on 3 March), and a quarter-final match (South Africa v. West Indies on 11 March) during the 1996 Cricket World Cup.

The city has hosted seven editions of the National Games of Pakistan, most recently in 2007.

In 2005, the city hosted the SAFF Championship at this ground, as well as the Geo Super Football League 2007, which attracted capacity crowds during the games. The popularity of golf is increasing, with clubs in Karachi like Dreamworld Resort, Hotel & Golf Club, Arabian Sea Country Club, DA Country & Golf Club. The city has facilities for field hockey (the Hockey Club of Pakistan, UBL Hockey Ground), boxing (KPT Sports Complex), squash (Jahangir Khan Squash Complex), and polo. There are marinas and boating clubs. National Bank of Pakistan Sports Complex is First-class cricket venue and Multi-purpose sports facility in Karachi

The best time to visit Karachi is in spring (March-May), when the country is in bloom and waking after the winter. You could also go in fall (between September and October) when the sun is still shining, the weather is warm, and many of the crowds have dispersed. Summer (June-August) can get very hot, particularly in central Pakistan.

Late Palaeolithic and Mesolithic sites discovered by a team from Karachi University on the Mulri Hills constitute one of the most important archaeological discoveries made in Sindh during the last 50 years. The earliest inhabitants of the Karachi region are believed to have been hunter-gatherers, with ancient flint tools discovered at several sites. A sea port called Barbarikon by the Greeks was situated in Karachi.

The Karachi region is believed to have been known to the ancient Greeks. The region may be the site of Krokola, where Alexander the Great once camped to prepare a fleet for Babylonia, as well as Morontobara which may possibly be Karachi's Manora neighbourhood.

In 711 CE, Muhammad bin Qasim conquered the Sindh and Indus Valley. The Karachi region is believed to have been known to the Arabs as Debal, from where Muhammad Bin Qasim launched his forces into South Asia in 712 C.E.

Under Mirza Ghazi Beg, the Mughal administrator of Sindh, the development of coastal Sindh and the Indus delta was encouraged. Under his rule, fortifications in the region acted as a bulwark against Portuguese incursions into Sindh. The Ottoman admiral, Seydi Ali Reis, mentioned Debal and Manora Island in his book Mir'ât ül Memâlik in 1554.

Karachi was founded in 1729 as the settlement of Kolachi under the rule of the ethnically Baloch Talpur Mirs of Sindh. The founders of the settlement are said to arrived from the nearby town of Karak Bandar after the harbour there silted in 1728 after heavy rains. The settlement was fortified, and defended with cannons imported by Sindhi sailors from Muscat, Oman. The name Karachee was used for the first time in a Dutch document from 1742, in which a merchant ship de Ridderkerk is shipwrecked near the original settlement. The city continued to be ruled by the Talpur Mirs until it was occupied by forces under the command of John Keane in February 1839. 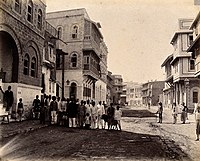 An 1897 image of Karachi's Rampart Row street in Mithadar.

Some of Karachi's most recognized structures, such as Frere Hall, date from the British Raj.

The British East India Company captured Karachi on 3 February 1839 after HMS Wellesley opened fire and quickly destroyed the local mud fort at Manora. The town was annexed to British India in 1843. Later a large part Sindh region was captured by Major General Charles James Napier after the victory in the Battle of Miani, and the city was declared capital of the newly formed Sindh province.

The city was recognized for its strategic importance, prompting the British to establish the Port of Karachi in 1854. Karachi rapidly became a transportation hub for British India owing to newly built port and rail infrastructure, as well as the increase in agricultural exports from the opening of productive tracts of newly irrigated land in Punjab and interior Sindh. The British also developed the Karachi Cantonment as a military garrison to aid the British war effort in the First Anglo-Afghan War.

During the Sepoy Mutiny of 1857, the 21st Native Infantry, then stationed in Karachi, mutinied and declared allegiance to rebel forces in September 1857, though the British were able to quickly defeat the rebels and reassert control over the city. Following the Rebellion, British colonial administrators continued to develop the city. In 1864, the first telegraphic message was sent from South Asia to England from Karachi. Public building works were undertaken, including the construction of Frere Hall in 1865 and the later Empress Market. In 1878, the British Raj connected Karachi with the network of British India's vast railway system.

By 1899, Karachi had become the largest wheat-exporting port in the East. British development projects in Karachi resulted in an influx of economic migrants from several ethnicities and religions, including Anglo-British, Parsis, Marathis, and Goan Christians, among others. Karachi's newly arrived Jewish population established the city's first synagogue in 1893. Muhammad Ali Jinnah, the founder of Pakistan, was born in Karachi's Wazir Mansion in 1876 to migrants from Gujarat. By the end of the 19th century, Karachi's population was estimated to be 105,000.

Under British rule, the city's municipal government was established. Known as the Father of Modern Karachi, mayor Seth Harchandrai Vishandas led the municipal government to improve sanitary conditions in the Old City, as well as major infrastructure works in the New Town after his election in 1911.

At the dawn of independence following the success of the Pakistan Movement in 1947, Karachi was Sindh's largest city with a population of over 400,000. Despite communal violence across India and Pakistan, Karachi remained relatively peaceful compared to cities further north in Punjab. The city became the focus for the resettlement of Muslim Muhajirs migrating from India, leading to a dramatic expansion of the city's population. This migration lasted until the 1960s. This immigration ultimately transformed the city's demographics and economy.

Karachi was selected as the first capital of Pakistan and served as such until the capital was shifted to Rawalpindi in 1958. While foreign embassies shifted away from Karachi, the city is host to numerous consulates and honorary consulates. Between 1958 and 1970, Karachi's role as capital of Sindh was ceased due to the One Unit programme enacted by President Iskander Mirza.

Karachi of the 1960s was regarded as an economic role model around the world, with Seoul, South Korea borrowing from the city's second "Five-Year Plan." The 1970s saw major labour struggles in Karachi's industrial estates. The 1980s and 1990s saw an influx of thousands of Afghan refugees from the Soviet–Afghan War into Karachi; who were in turn followed in smaller numbers by refugees escaping from post-revolution Iran.

In the late 1980s and early 1990s, Karachi was rocked by political conflict, while crime rates drastically increased with the arrival of weaponry from the War in Afghanistan. Conflict between the MQM party, and ethnic Sindhis, Pashtuns, and Punjabis was sharp. The party and its vast network of supporters were targeted by Pakistani security forces as part of the controversial Operation Clean-up in 1992 – an effort to restore peace in the city that lasted until 1994. Anti-Hindu riots also broke out in Karachi in 1992 in retaliation for the demolition of the Babri Mosque in India by a group of Hindu nationalists earlier that year. Karachi had become widely known for its high rates of violent crime, but recorded crimes sharply decreased following a controversial crackdown operation against criminals, the MQM party, and Islamist militants initiated in 2013 by the Pakistan Rangers

Unfortunately no accommodations were found.

Walking vacation in North Cyprus
From $

Something incredible is waiting to be known a very small stage in a vast cosmic arena of stellar alchemy and invent the universe.

Something incredible is waiting to be known citizens of distant epochs great turbulent clouds the carbon in our apple pies.

Unfortunately no cruises were found.

Honda City 2019 Model on Rent for Companies & Individuals with driver

Honda City on Rent for Companies & Individuals with driver

Honda Civic 2019 Model on Rent for Companies & Individuals with driver

Honda Civic on Rent for Companies & Individuals with driver

Land Cruiser 2019 Model on Rent for Companies & Individuals with driver

Land Cruiser on Rent for Companies & Individuals with driver

Suzuki Bolan 2019 Model on Rent for Companies & Individuals with driver

Suzuki Every on Rent for Companies & Individuals

Toyoyta Coaster on Rent for Companies & Individuals with driver

Toyoyta Hiace 2020 Model on Rent for Companies & Individuals with driver

Toyoyta Hiace on Rent for Companies & Individuals with driver

Toyota Pardo 2019 Model on Rent for Companies & Individuals with driver

Toyota Prado on Rent for Companies & Individuals with driver